A chilling new video from ISIS shows a British boy and four other children executing prisoners in cold blood in Syria.

The grotesque nine-minute video is believed to have been recorded recently in the ISIS capital of Raqqa, in Syria, and shows the organisation is becoming even more brutal as it retreats into its heartland.

The video shows five boys – believed to be from Britain, Egypt, Turkey, Tunisia and Uzbekistan, wielding handguns and wearing the desert camouflage.

One of the youngsters makes a blood-curdling shriek in Arabic and slaps one of the terrified captives on his shaved head before they raise their guns and kill the five men, ‘atheist’ Kurdish fighters who were captured during a battle.

The Sun reported the British boy was identified only as Abu Abdullah al-Britani. He is white, blue-eyed and aged around 12.

Abu means ‘Son of’ in Arabic, which suggests the boy may be the son of Abdullah al-Britani, a young British jihadist who married in Syria and was killed in a drone strike. 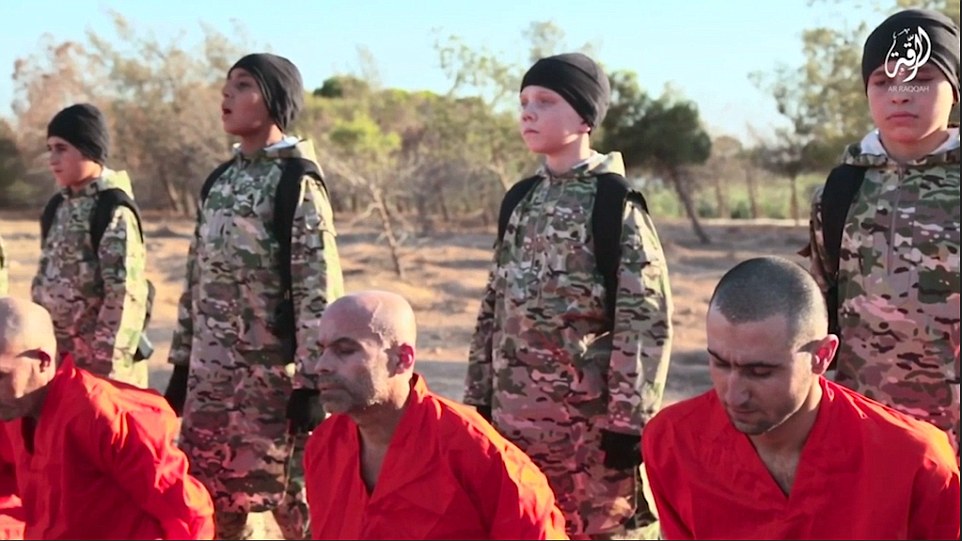 The British boy (second from right, in camouflage) shows all the signs of being brainwashed

The Times says one of the boys says in Arabic: ‘No one can save the Kurds even with the support of America, France, Britain, Germany, the devils in hell.’

He then calls for the takbir and the other boys shout in unison – Allahu Akbar (God is Great) before raising their pistols to the sky and shooting the prisoners. Their bodies are later shown with bullet wounds to the head.

The children copy five older jihadists who execute prisoners in orange jumpsuits and butcher them with knives.

The age of criminal responsibility in Britain is 10 so if the boy was captured and sent back to Britain to face justice he could be prosecuted for murder. 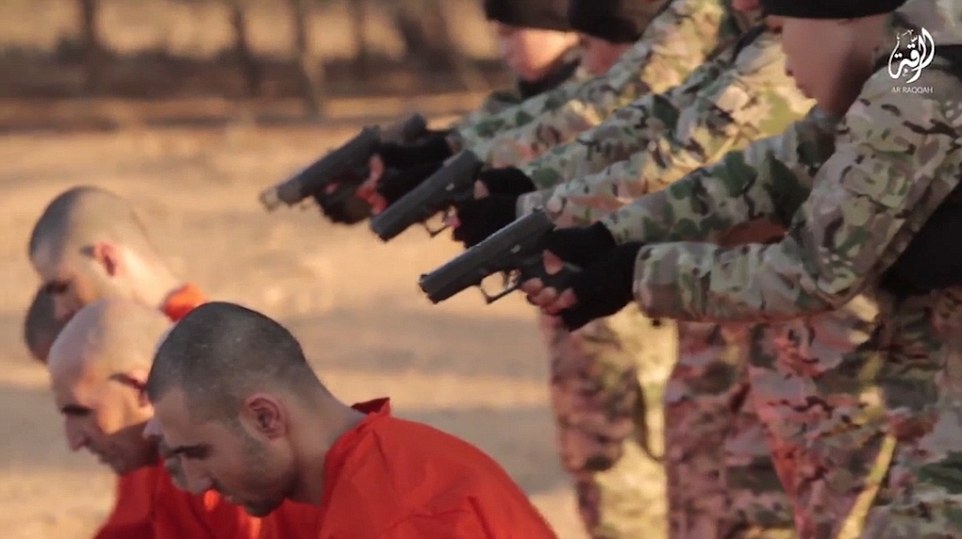 The horrific video shows the boys, who are all aged around 12 or 13, executing prisoners with handguns

Dozens of British jihadists are believed to be fighting for ISIS in Syria and Iraq under the nom de guerre al-Britani, which simply means British in Arabic.

Last year Assad Uzzaman, 25, from Portsmouth, was killed in Syria while using the name al-Britani.

ISIS has been increasingly using child soldiers – known as the ‘Cubs of the Caliphate’ amid speculation it is running low on manpower as it retreats from positions in Syria and Iraq and falls back on its stronghold, around Raqqa.

The Quilliam Foundation reported this year that around 50 British children are ‘growing up on jihad’ and being groomed to become ISIS fighters. 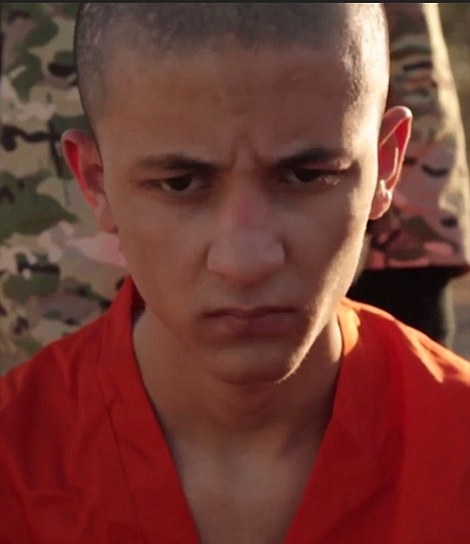 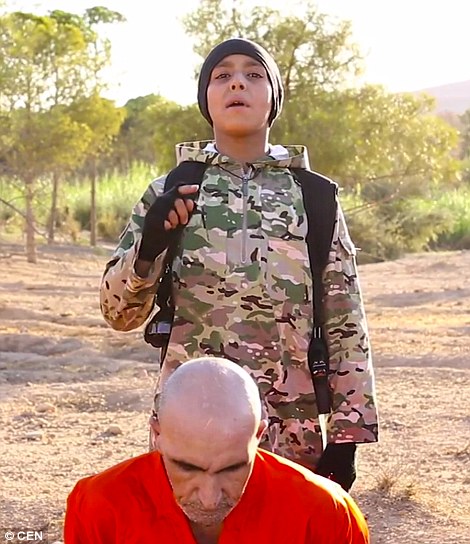 The video shows the prisoners, wearing orange jumpsuits, kneeling on the ground and preparing for death (left). One of the boys then shouts out in Arabic a verse from the Koran before the hapless prisoners are killed 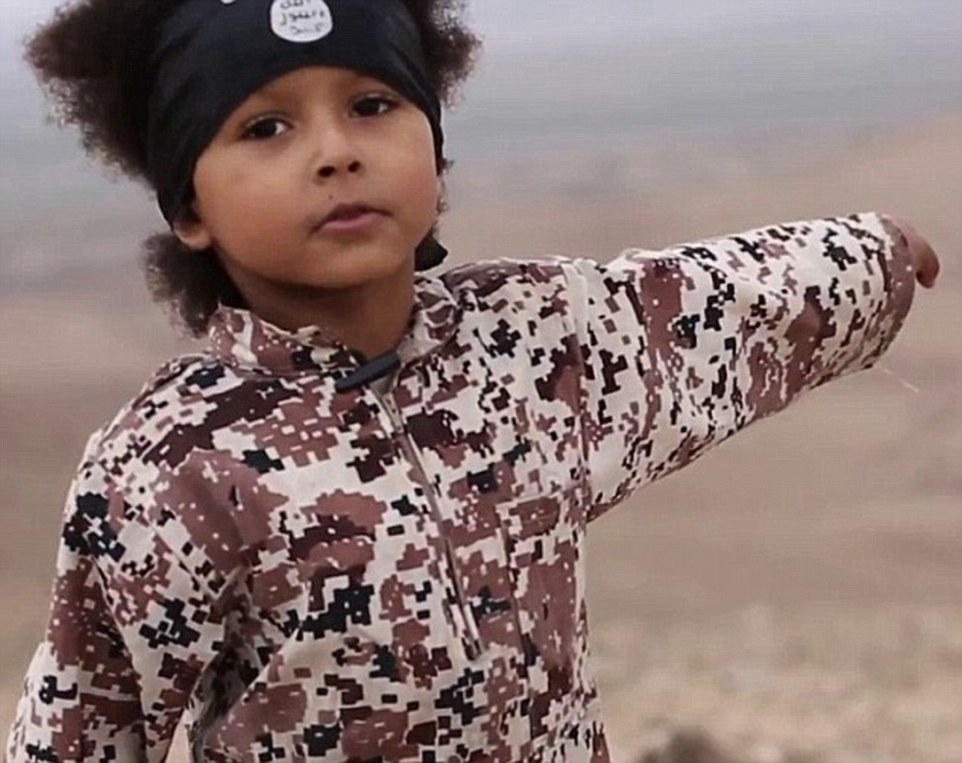 In January this year Isa Dare, a five-year-old British boy dubbed ‘Jihadi Junior’ featured in an ISIS video. He shouted: ‘We will kill the kuffar [non-believers]’ before ISIS fighters executed several prisoners. His mother, Grace Dare, from Lewisham, south east London, is believed to have taken him to join ISIS 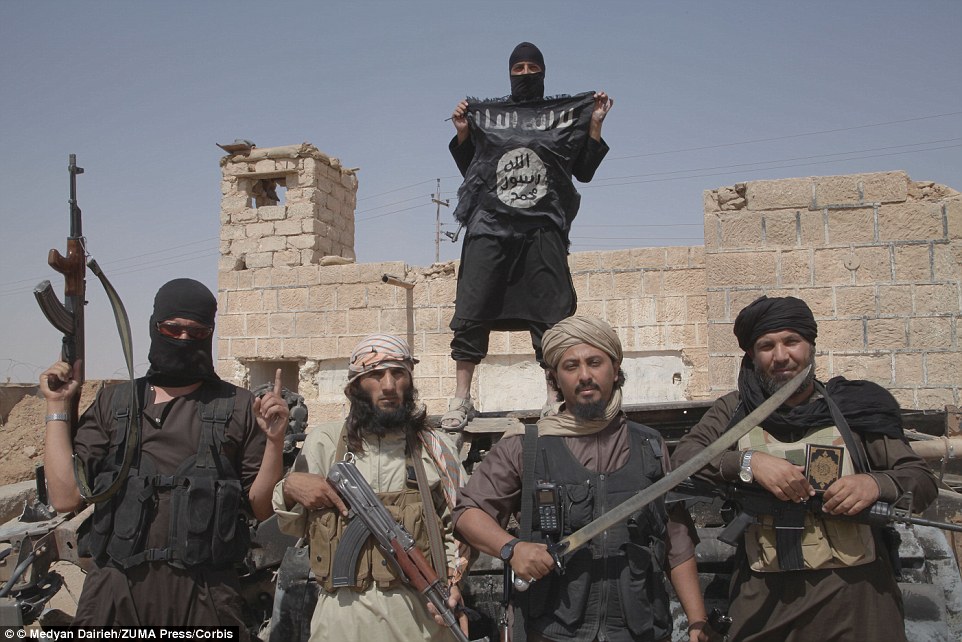 ISIS fighters pictured in 2014 at the height of their power. But in recent months they have been retreating and falling back on Raqqa as they come under attack from all sides

‘THE CUBS OF THE CALIPHATE’

ISIS is now using an unprecedented number of children – dubbed ‘Cubs of the Caliphate’ – to launch devastating suicide attacks throughout the region and beyond.

Within months of the caliphate being founded, more than a thousand children under the age of 16 had been recruited.

Once they are recruited by IS, the children’s isolation leaves them utterly under the control of military trainers, who school them in the fundamentals of the most fascistic interpretation of sharia law.

Even small children are indoctrinated – from the moment they are able to recite the Koran – into believing that the most honourable act they can perform is to die in the name of the self-declared ISIS leader, Caliph Abu Bakr al-Baghdadi.

In the training camps, these children are fed a constant diet of DVDs of jihadi operations against ‘infidels’, which cultivates a murderous hatred of everyone but extremist Sunni Muslims. They are forbidden access via the internet and satellite television to the outside world.