See also: Saudi money all through Chch Shooting saga.
See also: The Deans Ave facility was partly funded by a $460,000 gift from the Saudi kingdom.

The silence of NZ human and women’s rights campaigners to revelations of decades of Saudi sexual abuse has been deafening.

Who’s involved in maintaining the NZ silence:
NZ Government: Global champion of women’s rights, unless they are foreign slave women in Islamic lands. Sets the media rules for what is acceptable to broadcast or publish.
Mohammed: Notoriously white-skinned warlord, trader and owner of black sex-slaves who set current Islamic behavioural rules centuries ago.
Saudi Arabia: Dis-owned by NZ Muslims as “not real Muslims” for their terrorist efforts (currently on full display in Yemen), but who finance the expansion of Islam in NZ, mainly through FIANZ.
FIANZ: Profiting millions from halal fees certifying exports to Saudi Arabia, demonstrating after the March 15 attack they were the local representative spreading global Islam here in NZ.

Dhaka, Bangladesh – Shirina Begum was no stranger to sleeping on an empty stomach. For days on end, she had to consume “bhater mar” (the starchy water poured off cooked rice) to quell her hunger after feeding her two children and ailing husband.

Growing up in the small Bangladeshi village of Namorikari in Lalmonirhat, which often faces seasonal famines, 29-year-old Begum struggled to make ends meet.

With no cultivable land at her disposal and living in a house made of straw, she seemed destined to live her life on subsistence.

Then one day, she heard that one of her neighbours was going to Saudi Arabia to work as a housemaid.

“I decided to borrow money from a local moneylender and go to Saudi Arabia to work there,” she said.

In May this year, she started her journey, leaving behind her family. Her agent told her that she would only need to cook for a family of four in the city of Al-Kharj.

She later found out that the family had six members and her duties also included cleaning, washing and other household chores.

“It was a tough job for $235 a month. I needed to work for 14-15 hours straight. It was hard for me to understand their language [Arabic]. I also couldn’t cook to their taste. I didn’t have any access to a phone, so I couldn’t talk to my family back home,” she said.

“They also beat me with a stick sometimes.”

Begum said she was also sexually assaulted by the eldest son of the family, which spurred her to run away.

“I was sleeping in the kitchen. Suddenly I realised someone was trying to get on the top of me. I screamed loud but he shut my mouth with his hand. Then he molested me. At one point, I applied all my force and he was compelled to leave me,” she said.

The next day, she mustered the courage and fled to the nearest police station. As she did not have proper immigration papers, she spent nearly four weeks in prison until she was able to return to Bangladesh with 20 others in late October with the help of Bangladeshi embassy in Saudi Arabia.

“I was treated like an animal inside the prison,” she said.

“I was able to work for only four months and I got salary of just two months. Now I am in debt as I can’t pay back to my loan sharks.”

Begum is among the nearly 50,000 women who went to the Gulf country for work until the end of September this year.

According to government figures, more than 300,000 female workers have travelled to Saudi Arabia since 1991, but many of them return with stories of abuse and exploitation.

In the last four years, at least 66 Bangladeshi female workers died in Saudi Arabia, 52 of them committing suicide.

The story of Dalia Akhter, another migrant who worked in Saudi Arabia, ended with a broken limb.

Akhter, a resident of Gendaria outside the capital Dhaka, was told she would be taking care of an elderly woman in the town Ad-Dilum in Saudi Arabia in exchange for $266 a month.

However, she woke up to the harsh reality when she reached there in July 2018. Long working hours, rude behaviour and physical abuse were everyday experiences.

“The Malkin (her female employer) used to beat me with a stick when I could not understand her instructions. I felt helpless and trapped,” she said.

After she refused to continue working for the family, she was “sold” to another family, Akter says. Under the Saudi “kafala” – or visa sponsorship – system, a migrant worker’s residency permit is tied to the “sponsoring” employers whose written consent is required for the worker to change employers or leave the country under normal circumstances.

Akter’s working conditions got worse. The new family was even harsher on her than the previous one, she says. She jumped from the roof of the three-storey house in an attempted suicide and broke her leg, after which her employer left her with the Bangladeshi embassy in the capital, Riyadh.

After living in a safe house in Riyadh run by the Bangladeshi embassy for three weeks, Akhter was sent back to Bangladesh this September, her leg permanently incapable of healing.

“Before going to Saudi Arabia, I used to work in garment sector. Now with a broken leg, I have become a burden to my family,” said Akhter.

Victims of a cruel system

Both Begum and Akhter were victims of a system in which employers confiscate passports, withhold wages, and force migrants to work against their will. Workers who leave their employer without their consent can be charged with “absconding” and face imprisonment and deportation, Human Rights Watch said.

After a seven-year ban on employing Bangladeshi migrant workers, Saudi Arabia started taking workers from the South Asian nation of nearly 160 million through a bilateral deal signed at the end of 2015.

According to BRAC, a non-governmental organisation working with Bangladeshi migration workers, last year a total of 1,353 female workers came back to Bangladesh from Saudi Arabia because of the inhuman working conditions there.

“After they came back, they reported of mental, physical and sexual abuse,” said Shariful Islam Hasan of the migration programme at BRAC.

He said 66 female workers have died in the last four years in Saudi Arabia, 52 cases were suicides.

“I haven’t found a single case where the employers have been punished. So the Saudi employers think they can do whatever they want with these workers without facing any consequences,” Hasan told Al Jazeera.

Bangladesh’s ministry of expatriates, which previously denied allegations of sexual abuse of female workers in Saudi Arabia, also admitted the abuse of its workers this September.

A government report said many women who went to the kingdom to work as domestic help returned after sexual and other kinds of abuse.

Of the 111 women who returned to Bangladesh from Saudi Arabia on August 26, 38 were physically or sexually abused and 48 others were deprived of their salary and allowances, according to the report.

Golam Moshi, ambassador of Bangladesh to Saudi Arabia, also admitted the ill-treatment of some of the female migrant workers at the hands of Saudi employers.

“However, the female returnees comprised of less than 10 percent of the total workforce, the rest are still working,” he told Al Jazeera, referring to about 2 million Bangladeshi expatriates in the kingdom.

Moshi partially blamed “greedy manpower agents” for the situation, saying they spread out across the impoverished parts of the country to lure poor women. 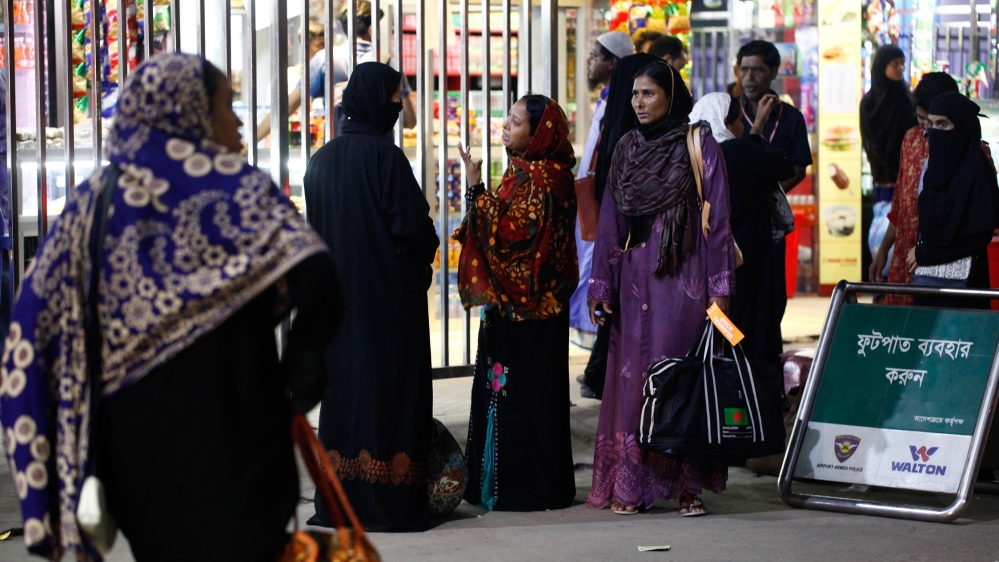 “They are untrained and unprepared for a foreign land and culture,” he said, “Thus most of them get mentally traumatised and homesick when they start working here in Saudi households.”

According to the ministry of expatriates, there are 1,221 registered agencies and over 80 percent of them send workers to Saudi Arabia.

Sohel Ahmed, managing partner of the BS International agency, said they only send “willing” people abroad after telling them their future duties in Saudi Arabia.

Ahmed told Al Jazeera: “It’s hard for us to understand what will happen to them from afar. We take measures whenever we receive any complaints. We try to bring them (the workers) as soon as possible.”

Abul Hossain, the owner of the Concord Apex agency, said: “Most of them are working happily and sending valuable remittance to their family. I don’t deny that few of them are coming back. But the success rate is way higher than the failure.”

Ahmed Munirus Saleheen of the ministry of expatriates told Al Jazeera that the institution has a special arrangement with the Saudi government for expatriates subjected to torture.

“We try to keep them in the safe houses in Riyadh, Medina or Jeddah in Saudi Arabia and later try to bring them back as soon as possible after completing necessary procedures,” he said.

She added that a victim has to stay in safe houses in Saudi Arabia if she wants to file a complaint.

“As it’s a legal procedure, it takes a long time to complete the investigation and other formalities. As a result, most of the victims are unwilling to lodge complaints and simply wish to return home,” he added.