See also: The Sacred City of Mecca: Have Muslims Got It Wrong?
See also: The Deans Ave facility was partly funded by a $460,000 gift from the Saudi kingdom.

Saudi Arabia’s King Salman has invited some 200 survivors and relatives of the victims of the Christchurch Mosque shootings to be his guests at the Hajj pilgrimage this week.

The monarch is providing airfares and accommodation to the pilgrims from New Zealand who will join at least 2.5million others for the annual Hajj journey to Mecca.

The Saudi ambassador to New Zealand, Abdulrahman Al Suhaibani, says King Salman was shocked by the March 15 attacks at two mosques in which an Australian white supremacist has been charged with killing 51 people.

The atrocity has been cited as inspiration by other white supremacists, most recently in an attack at a Walmart store in El Paso, Texas, that left at least 22 people dead. 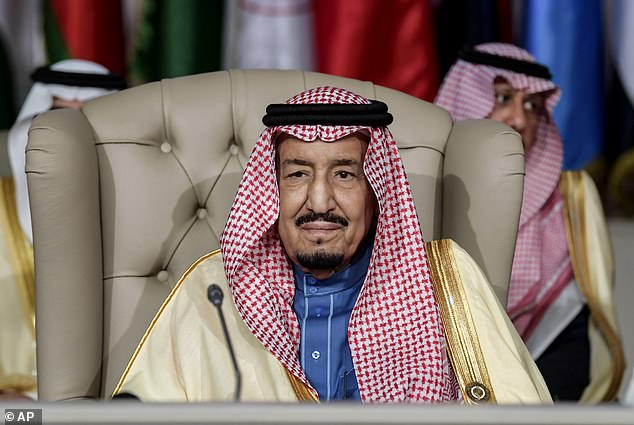 Saudi Arabia’s King Salman is providing airfares and accommodation to the pilgrims from New Zealand who will join at least 2.5million others for the annual hajj journey to Mecca

Each year, the king invites several hundred people to perform the hajj as his own guests, often selecting those most touched by tragedy that year.

Al Suhaibani said this is the first time the king has invited anyone from New Zealand on his annual program to help get people to the hajj who otherwise may struggle to make it.

Two weeks ago, the ambassador travelled to Christchurch to hand out the simple white garments the male pilgrims will wear. The terry cloth garments worn by men are meant to strip pilgrims down of adornment and symbolise equality of mankind before God.

‘It’s a wonderful time and this is a golden chance for people to get spiritual elevation,’ says Gamal Fouda, the imam at the Al Noor mosque, one of the two mosques that were attacked.

Fouda, who also survived the shootings, is travelling with the group as a spiritual leader. He says that while all Muslims want to do the hajj, many tend to delay their trips due to the expense, especially from distant New Zealand. 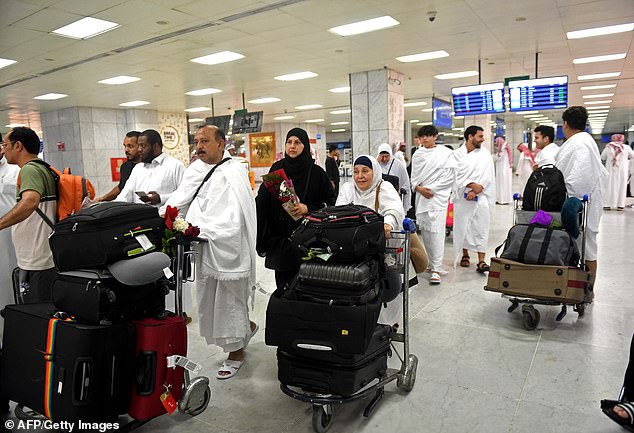 Families of victims of the March 2019 attack on mosques in New Zealand, arrive at Jeddah airport on August 2 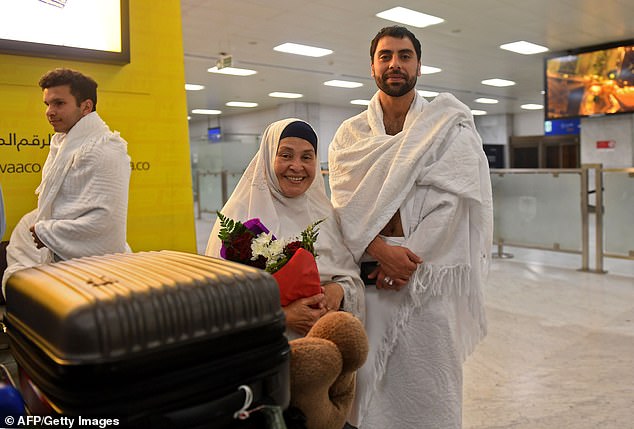 Fouda says the memories of the shooting remain fresh in everybody’s minds and his mosque hasn’t yet returned to normal.

‘The most important thing is that the New Zealand community, including Muslims, they stood together against hate,’ Fouda says. ‘And we are still saying that hate is not going to divide us. We will continue to love each other.’

Atacocugu says he was feeling good on March 15 when he entered the Al Noor mosque for Friday prayers after finishing a final session with an acupuncturist, who was treating him for a sports injury.

When he saw the gunman walk into the mosque, he thought at first he was a police officer because of his paramilitary clothing. Then the man started shooting and Atacocugu found himself looking right at him as he fired a bullet into Atacocugu’s mouth, shattering his jaw. (isw edit: Miracle no scarring on skin!!) 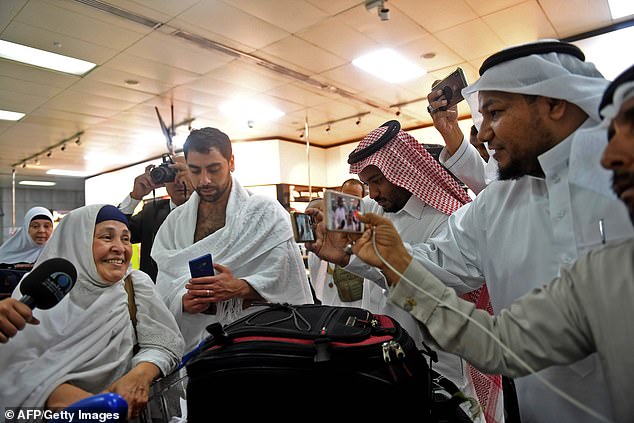 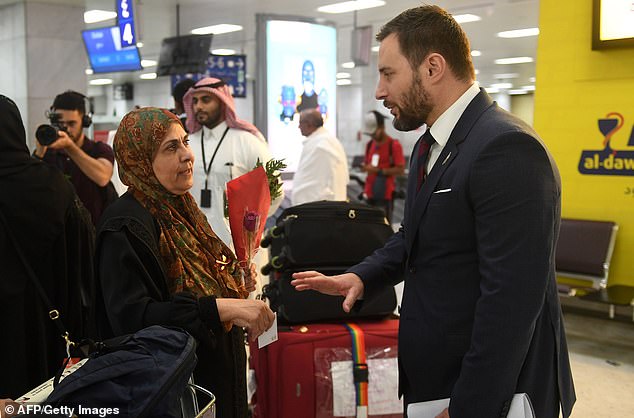 James Munro, Ambassador of New Zealand to the Kingdom of Saudi Arabia, speaks with the families of victims of the March 2019 attack on mosques in New Zealand

After falling to the floor, his left arm ended up protecting his vital organs as the gunman continued firing bullets into him.

Recovering at the Christchurch Hospital after the shooting, Atacocugu couldn’t eat for a week and couldn’t walk for three weeks.

But after several surgeries, he’s now able to walk unassisted and get some use from his left hand. He has more surgeries ahead and is being helped in Saudi Arabia by his 21-year-old nephew, who is travelling with him.

Another of those travelling to the hajj is 33-year-old Aya Al-Umari, whose brother Hussein, 35, was among those killed at the Al Noor mosque.

‘We had a very typical sibling relationship,’ she says. ‘So you have your nagging elder brother, nagging little sister. But at the end of the day you love each other, even though you don’t verbally say it. But you just telepathically know that.’

She says witnesses and video taken by the gunman indicate her brother stood up to the attacker, allowing others to escape. 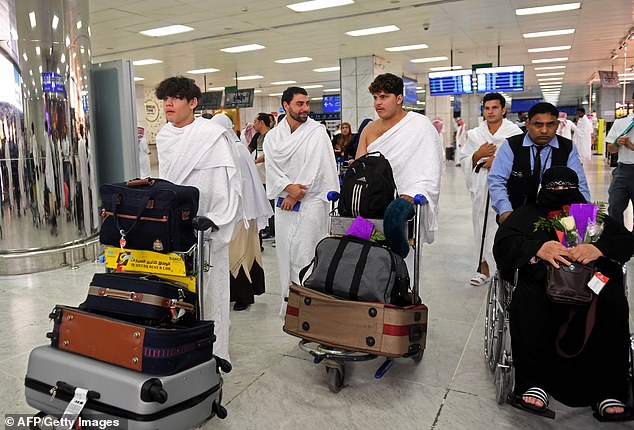 Another of those travelling to the hajj is 33-year-old Aya Al-Umari, whose brother Hussein, 35, was among those killed at the Al Noor mosque 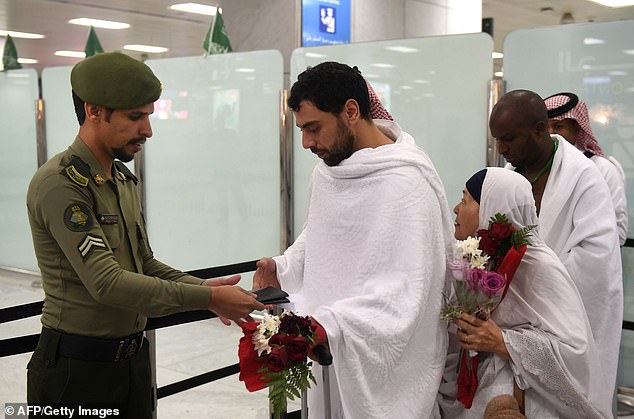 Including the pilgrims from New Zealand, more than 1.8 million visitors had arrived by midday local time on Tuesday, authorities said

‘So he fought to the very last minute,’ she says. ‘And this is Hussein, in his nature. He’s always the type of person who would want to see if there is danger, he’d face it, he wouldn’t escape from it.’

When visiting Mecca, Al-Umari says, she’ll pray for her parents and herself to have the patience to cope with the loss of Hussein.

She also plans to pray for the other families from her mosque who lost loved ones. And she says she feels her brother will be with her in Saudi Arabia.

Crowds of worshippers have already begun to gather in Mecca in the days ahead of the hajj, the focal point of the Islamic calendar.

Crowds of faithful from across the world wore flowing white robes as they descended on the holy city located in the west of the ultra-conservative kingdom.

The pilgrims will undertake religious rites that have remained unchanged since the founding of Islam 14 centuries ago.

Last year almost 2.5 million Muslims made the pilgrimage to Mecca, Saudi Arabia. Named ‘Hajj’ the journey is made annually and it is mandatory for every Muslim to travel to the holy site at least once during their life if they are ‘physically and financially capable’

Hajj is one of the five pillars of Islam and Muslims must perform it at least once in their lives if they can afford to.

‘There are all nations of the world, all languages. There are no differences between us,’ said Nurul Jamal, a 61-year-old pilgrim from India.

Mecca, closed to non-Muslims, is home to the Kaaba – a cube structure draped in black cloth embroidered in gold located at the heart of the mosque.

The Great Mosque of Mecca with its Ottoman minarets sits amid skyscrapers that host upmarket malls and luxury hotels.

Muslims face toward the Kaaba when praying the prescribed five-times daily.

Pilgrims circle the Kaaba seven times and perform a number of sacred rites.

While waiting for the beginning of the hajj, worshippers roam the esplanade or pray in the mosque in stifling heat. 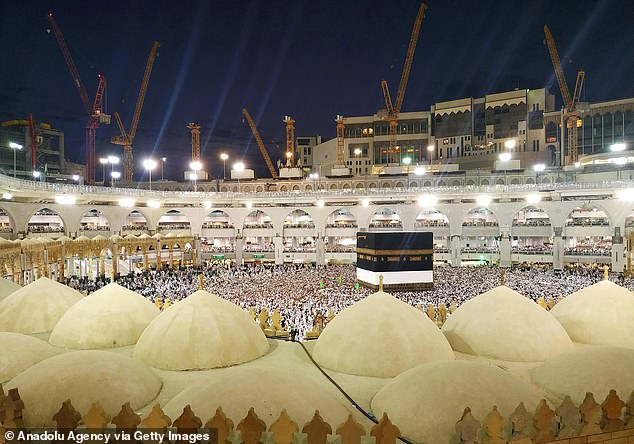 Despite the huge number of pilgrims attending every year, the Hajj can be an extremely expensive journey to make. Low-cost pilgrimages from inside the Middle East can start at around $800, but some travel groups operating from the US offer 5-star packages for a 12-day trip at $11,900 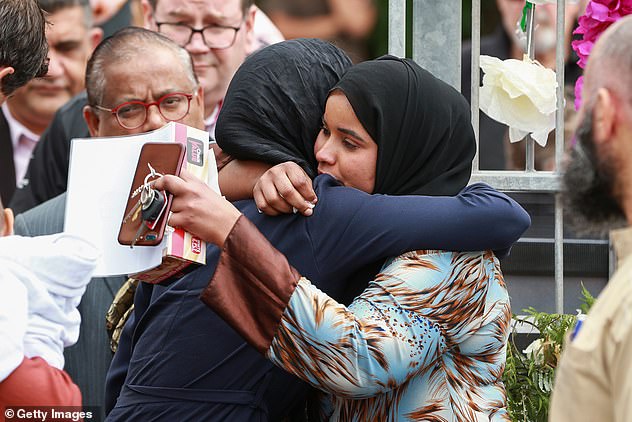 New Zealand Prime Minister, Jacinda Ardern, sympathised with those who lost loved ones in the Christchurch massacre (pictured)